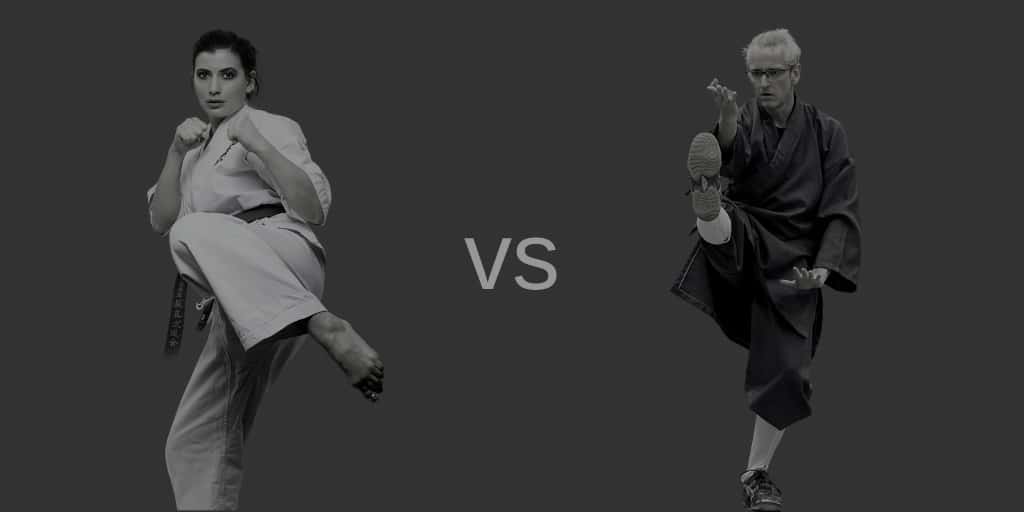 Karate vs Kung Fu – What are the differences?

Karate-Do translates to ‘Empty Hand’. The only weapons traditional Karate teaches the student to use belong to their own body. Karatekas are taught how to become a walking weapon simply by using parts of their own body such as fists, feet, fingers, knees, elbows, forearms, and shins.

Shaolin Kung Fu has 5 styles, each influenced by an animal. These 5 animals are the Tiger, Crane, Snake, Leopard, and Dragon. Karate has no such influence.

Karate is home to arguably the most recognized martial arts uniform — the Karate Gi. Traditionally, Karate Gis are white and many schools won’t accept any other colour so to adhere to the tradition. Black Gis are becoming more popular and seem to be more accepted, particularly in Western society.

See This After:  8 Levels of Karate Belts in Order of Colour

Karate Gis are easily distinguished by their angled overlap at the top half front of the Gi that doesn’t connect at any point like Taekwondo uniforms do. The ties are hidden underneath the jacket, not to be seen.

Kung Fu uniforms come together at the top straight up and down, some with many noticeable ties to keep each side of the jacket together.

Karate uses barefoot training except in tournaments. Even Makiwara and bag training are traditionally trained barefoot.

Kung Fu used a unique lightweight shoe that has a flat and flexible sole, allowing for lots of foot mobility.

Kung Fu tends to be more flashy than Karate, resembling other sports such as Parkour, gymnastics, and even break dancing. Arguably, this doesn’t make Kung Fu more or less effective than Karate.

Karate teaching fighting techniques only. The only objectives of Karate are to defend oneself if needed and to end the fight as soon as possible.

5. Kung Fu is Older Than Karate

As you may or may not know, Karate is derived from Kung Fu. Kung Fu is said to have originated as early as 1911 BC, although nobody can be sure.

See This After:  No Karate Near Me, So I Signed Up Online - My Experience

Karate didn’t become its’ own martial art until the 17th century. After evolving in East Asia for centuries, Karate became its own define system by practitioners residing in Okinawa. This system is not the system you know today though.

There were no uniforms, ranking systems, belts, commercialized dojos, rigid styles or curriculums. Just pure Karate-Do as a fighting discipline and way of life.

4. Karate has Less Variety of Forms and Techniques

Karate teaches practical self-defense — using hand and foot strikes as its main offense with the philosophy to end the fight with 1 single powerful blow. Having less variety than Kung Fu means more practice with the same techniques. This repetition may lead to a higher effectiveness per technique.

Kung Fu tends to be more elusive and defensive. The added variety of stances and forms in Kung Fu are more obscure and non-traditional compared to the straight-line style of Karate.

Nearly all of Karat’s stances, strikes and blocks are front/back or side. Kung Fu tends to have a more circular motion when it comes to many of its forms. This is partly why it appears to be more elegant in nature while Karate appears more robust.

This is one of the larger differences between Karate and Kung Fu. Although Karate Katas are performed as if defending against multiple opponents, these don’t prepare you for a real battle. Karate Kumite (sparring) is primarily one vs one and therefore prepares one for such a battle.

See This After:  Best Dojo to Learn Karate Online, From a Real Student (2022)

Kung Fu on the other hand emphasizes defending against multiple opponents at once. Their training includes attacks coming from multiple angles.

In Karate, you are taught to diffuse and avoid a potentially volatile situation at all costs, fighting is the last resort. If a fight does ensue, Karatekas are taught to end the fight as soon as possible with one deadly strike.

Is Karate stronger than Kung Fu?